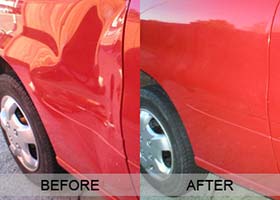 Imagine this, you’ve just returned from an event and you’re walking back to the street where you parked your car, still happy about the fact you managed to find free on-street parking close to the venue! However, you’re welcomed with a big shock because there’s a large dent sat in your bodywork, that definitely was not there when you left. You rack your brain for anywhere you know that does dent repairs but come up blank, so you give it a quick google search and come across something called paintless dent removal (PDR). What do you know, you’ve actually just clicked on this article and you’re about to find out what PDR actually is!

So, What Is Paintless Dent Removal (PDR)?

The name of this procedure pretty much tells you what it is, it’s a method in which dents are removed without damaging the manufacturer’s paintwork finish, thus resulting in no re-sprays or paint fillers. To elaborate, the dented panels are smoothly massaged and manipulated to remove the dent, with the use of specialist dent repair tools. With patience and concentration, this can be achieved without cracking or peeling the paintwork, which will result in the best finish!

Compared to the traditional dent repair services, paintless dent removal is quite a popular option due to it being less time-consuming and effectively cheaper. When you remove the tedious steps of using body fillers, finding the right paintwork colour and re-painting, PDR can essentially be finished within a couple of hours.

What Does The Method Of Paintless Dent Removal Entail? 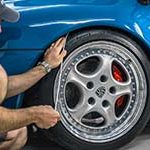 Paintless dent removal is a method which must be performed by trained specialist technicians, as the job requires a meticulous approach due to the dented panel needing to be precisely manipulated to return to its original position. Using specialist tapping tools and rods, the panel is gently massaged until the dent is gone. As expected, a deeper dent will need to be mended in steps.

The technicians will use an LED light that will reflect off the panel, thus it will reveal all the different contours in it, to allow them to get a flawless finish.

The Benefits Of Paintless Dent Removal

Are you sold on paintless dent removal yet? If so, then book your car in with Bodyteq today, our specialist technicians will have your car looking showroom ready in no time, as we always strive to deliver the best results for our customers. However, paintless dent removal isn’t suitable for all dents, so if you require traditional dent repair work involving body fillers and re-sprays, we also offer this service! If you’re interested in finding out more about this service, give us a call on 0207 998 4712.